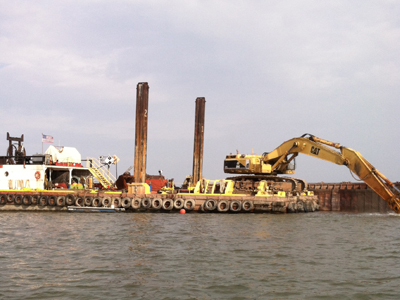 KS Associates provided engineering and construction-related services for an important dredging project for the Vermilion Port Authority. The project involved the removal of approximately 45,000 cubic yards of sand and sediment in the Vermilion Outer Harbor and in the Vermilion River up to the State Route 6 Bridge. Now complete, the project will help to maintain adequate water levels for safe and efficient boating operations.

Dredging operations of this federal navigation channel commenced in October 2013 and were complete one month later in November 2013.

KS Associates’ role on the project was to perform soundings, or lake-bottom and water-level measurements, before and after dredging to calculate and confirm dredge quantities; perform GPS hydrographic surveying; prepare bid documents; and perform construction inspection services. The dredging contract was awarded to Geo. Gradel Co., a Toldeo-based contractor.

The project was funded through a $506,000 grant from the Ohio Department of Natural Resources (ODNR), the first-ever grant of its kind allotted for a Lake Erie dredging project. According to Eileen Bulan, Mayor of the City of Vermilion at the time of the project, “Typically, dredging of federal channels is funded by the U.S. Army Corps of Engineers; however, federal budget cuts presented a roadblock. The City of Vermilion worked closely with the Vermilion Port Authority and ODNR to identify, apply for and secure a grant from the state, allowing the project to move forward.”

Vermilion is known as the crowning jewel of the South Shore of Lake Erie and is a thriving lakeside community. Maintenance of the Vermilion Outer Harbor and the Vermilion River helps the City remain an attractive destination for commercial and recreational boaters, which are important economic drivers. Eileen Bulan, Mayor, City of Vermilion