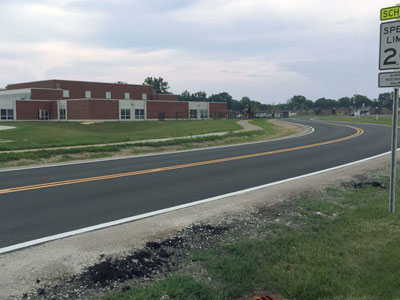 On May 11, 2015, KS Associates received a directive from the City of Vermilion to prepare design plans and perform bidding services for the resurfacing of Sailorway Drive, and to make sure the project was complete before the start of the 2015 school year. The contracting community in Northeast Ohio was stressed with work, and KS predicted it was going to be a challenge to make this happen in roughly 100 days.

Sailorway Drive is a main connector between the State Route 2 / State Route 60 corridor and the eastern part of the City, and the location of Vermilion High School and Sailorway Middle School. The Vermilion Local School District had recently relocated the last of its school facilities to the Sailorway campus, constructing the new Vermilion Elementary School at the northeast corner of Douglas Street.

Last resurfaced in 1998, the Sailorway asphalt pavement had exceeded its useful life and was in need of repairs. The KS team noted that, during engineering design, School Zone Signage and Pavement Markings were due for an update to enhance the safety of students. To further control vehicular movements, the City had established a No Parking Zone, and notification signage needed to be placed.

KS Associates delivered complete design documents to the City in three weeks and the project was advertised for bids on June 4, 2015. On June 19, 2015, three bids were received, with the low bid by Precision Paving being 20% below the engineer’s estimate. Precision Paving was authorized to proceed on July 1, 2015, and began construction activities on July 30, 2015. Asphalt paving was completed on August 3, 2015, and new traffic signs were placed that same week.

The project was completed in time for the start of the 2015 school year.